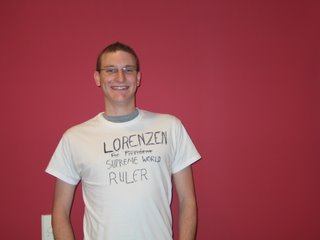 One of the joys of being an academic librarian is working with students workers. In the Reference Department , we have twenty students working at the Reference and Information Desks and another four working in government documents. Most stay for three to four years and I have always been impressed by the high caliber of student who have worked for us.

Sadly for me, these students invariably graduate and leave us. While this is good news, it is also represents a parting of ways. Although I do manage to stay in touch with some of them when they graduate, it is never the same.

Today was Eric Pasman's last day. He has worked for us since February 2003. And now he is off for a few months before he starts medical school next fall. He plans on becoming a pediatrician. For his last day, he wore a t-shirt which read Lorenzen for Supreme World Ruler. This both amused or annoyed people in the Reference Department. I was flattered but I did not know I was running for the job. The library administration expressed concern over the "bad influence" I was having on the next generation.

Good luck Eric. I know you will accomplish great things. And if I ever become supreme world ruler, there is a job for you in my administration.
Posted by M at 6:14 AM