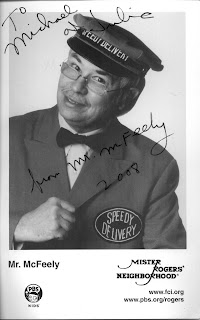 Last Saturday, I went to "Make a Difference Day" with my wife and two sons on the Central Michigan University campus. It was a literacy event with free books, free foods, and activities. Also in attendence was Mr. McFeely from Mister Rogers' Neighborhood.

We collected our free books and also stood in life so that the clowns could make us animals from balloons. However, I was most intertested in meeting Mr. McFeely. I grew up watching Mr. Rogers' and I was eager to meet the Speedy Deliveryman.

We stood in line a long time. It became apparent why in no time. Mr. McFeely spent a lot of time talking with each young fan (and parent!) who came up to him. After about thrity minutes, we finally made it to the front.

My two boys (10 and 5) had not seen much Mr. Rogers'. The show has had no new episodes in many years since Mr. Rogers died. PBS still runs it but not as frequently. Both boys were vaguely familiar with the show and Mr. McFeely and were polite as he signed a picture for each of them.

Then Julie and I got to speak with him. I thanked him for coming to CMU and for the years of work he had done on the show. I told him he had made a difference. He lighted right up and offered to sign a picture for Julie and I as well. The picture is above!

Mr. McFeely also shared with us that he has a movie coming out. It is Speedy Delivery: The Movie. In real life, Mr. McFeely is David Newell. He is now the Director of PR for Family Communications. He is a nice guy and I am glad I got to meet him.
Posted by M at 11:38 AM

Good to see reference to a show loved by my kids whwn we lived on the States. Jarbas.